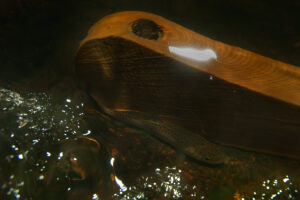 The Haaganpuro brook in Helsinki, is home to a wild brown trout population known as the “most urban trout in Finland”. As is the case with many urban streams around the world, also Haaganpuro has for long served as a part of the city’s surface water drainage system and stretches of the brook have been forced underground. Some of these underground tunnels offer favorable habitats for resident trout, but others are concrete pipes in which the speed of flowing water can get too high even for large sea-run trout to move upstream. 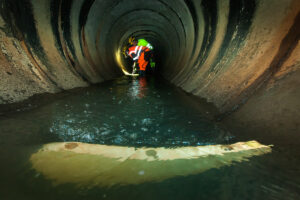 A citizen project led by Henrik Kettunen of Vaelluskala ry, a Finnish stream restoration organization, was initiated in 2017 to fix this problem in the steep 230 meters long tunnel in which the Haaganpuro brook passes underneath one of Helsinki’s main entrance roads. The first step was to measure the flow rate in the tunnel, and was conducted with funds provided by the local Rotary Club of southwest Helsinki. The study showed that when the speed of flowing water was slow enough for fish to swim, the water level was too low, and when the water level was high enough, the speed was too high for the fish to swim upstream through the long concrete pipe.

“The new ladder feels almost too good to be true. It’s hard not to get overly excited!”
– Atte Sjövall, Haaganpuro restoration activist

The next step therefore was to find a way to fix the observed problems. After discussions with the City of Helsinki and the local Centre for Economic Development, Transport and Environment, a plan was made to install wooden lamellas in the pipe in order to raise the water level when flow rate is low and to provide resting places for the fish when the flow rate increases. The first underground fish-ladder of this magnitude in Finland was consequently designed pro bono by Environmental Engineer Juha-Pekka Saarelainen, and finally a set of 50 specially cut larch lamellas were installed in early October 2020, just in time for the returning sea-run trout. 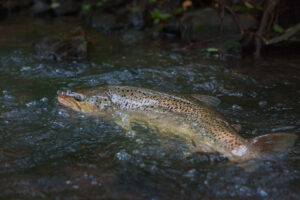 The new ladder opens up roughly 80% of potential spawning areas of the Haaganpuro brook for sea-run trout, and enables the fish to return from the sea for the first time in decades to the long stretches of stream running under the forest canopy of the Helsinki Central Park.